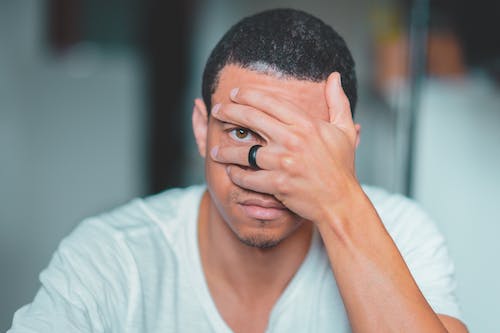 There are some pretty amazing defense mechanisms in nature. Sea slugs squirt out their own intestines to make a veiled escape. Birds like peacocks and turkeys ruffle their feathers.

Small animals like bugs and frogs carry poisons and colors on their backs to scare away predators—or punish stubborn ones. But when it comes to people, there may be a few defense mechanisms you’re using yourself that you barely recognize.

Sometimes an event or circumstance is so cataclysmicly devastating, we just tune it out, and don’t even know we’re doing it. You can become aware of your denial when other people around you call something to your attention.

This is sort of like denial, but it involves burying a thought of feeling deep inside, where it tends to come out in other ways. For example, you could be furious at your boss, and unable to release your anger at work, become vitriolic and argumentative at home.

It’s often easier to ignore our own faults, and pretend like other people have them instead. Projection involves seeing something bad in other people, which may or may not be there (like a negative character trait) when really, you are exhibiting that same trait.

This one involves taking a wrongdoing (by you on others, or from others onto you) and reasoning it out to be okay. You’ll have to create a complex new system of logic in order to work this one into the universe in an acceptable way, but all sorts of crime from embezzlement to genocide have been rationalized as acceptable.

Regression basically involves taking a step back developmentally, to a space where it’s physically or emotionally safe. Children often regress as they move through life, going through periods where they revert to acting like a younger child. Adults may also undergo this process. For example, after getting fired from a job, you may revert to the safety net of looking for a comparably paying job, instead of searching for something better.

Sometimes the primal instincts take over, and we get ready to fight. In situations that don’t have a lot of time around them, you can quickly jump into a reactionary mood before reflecting and calming down…for example, if someone cuts you off in traffic, you could step into a mode of road rage; or, if someone argues with you at work, you could quickly defend yourself by escalating the situation into a shouting match.

I truly hope you like this article as much as I love writing it. It would be awesome if you might learn something new here to accompany your journey to freedom.  So that’s it for now and feel free to cruise on another post inside my website. Thank you!

*We will not spam, rent, or sell your information*

Are you tired of not getting the RESULTS you want?

Are you a Newbie? Someone who is looking for a way to Make Money Online but doesn’t know where to start or what to do in Daily Basis?

Are you looking for a High Ticket Program but you can not afford the Admission price?

Are you feeling skeptical and are thinking about giving up this whole “Internet Marketing Laptop Lifestyle” thing because you think it’s not for you?

Do you want someone who can coach and mentor you to achieve your first $1K income Online by simply sharing massive value?

Do you want to be part of a private Inner Circle Group where you can get Support, Encouragement, and (most importantly) Results?

If you answer YES to any of these questions, then you are in the right place at the right time, because I’ve got something special for you!

I am looking for 10 people only who are willing to learn and TAKE ACTION to become my partner and we will make money together.

and then login into the Member’s Area and click “Become a Lifetime Partner” and upgrade immediately!

PS: This Promotion is ending soon! Hurry up before it’s too late!

10 Secret Traffic Sources
to Send Hungry Buyers To Your Offer

The Secret Sauce to make money online is the ability to drive MASSIVE Traffic and learn the exact techniques used by Professional Marketers and to do so with little budget and even FREE!

Yes, I Want This FREE Report!